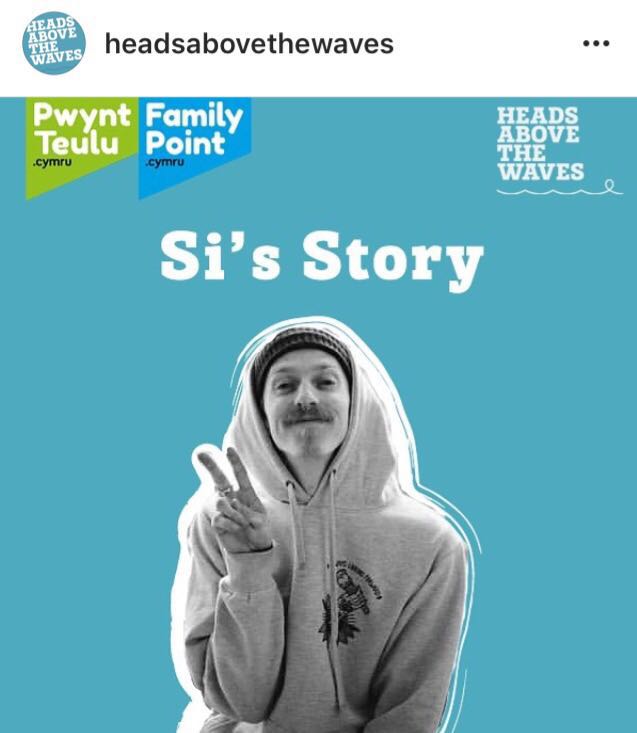 With all the negativity in the world of late, it’s good to remind ourselves of the good and inspirational stories, that keep us positive and make the world a better place.

This is why this week our #ManCrushMonday goes to the very lovely and inspirational, Si Martin. 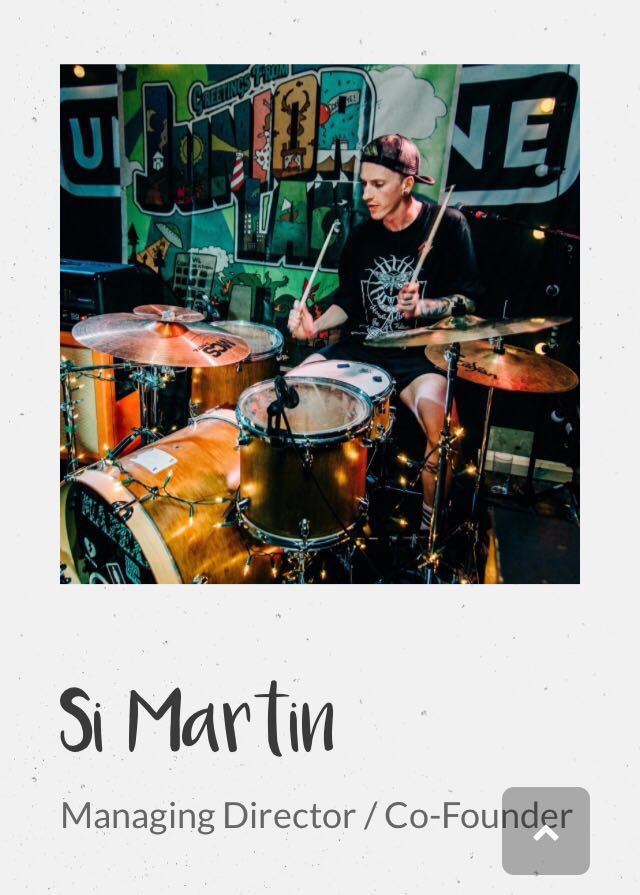 Si is founder of non-for-profit merch and community interest  company, Heads Above The Waves. The company promotes awareness of mental health and helps people accept who they are and stay strong. We caught up with Si to hear more… 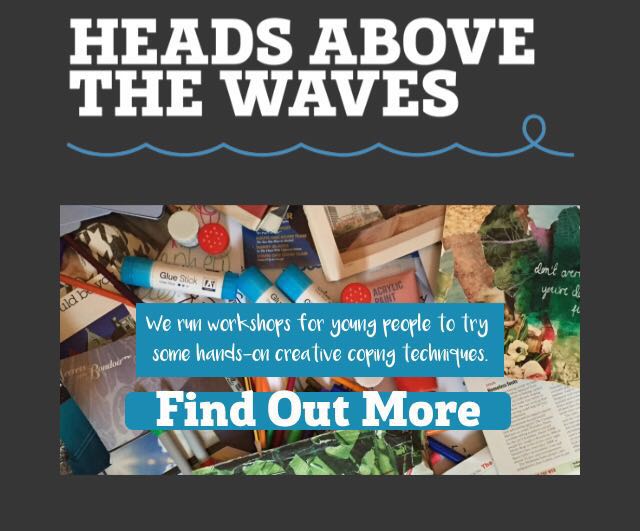 We try and introduce positive and particularly creative, alternative coping techniques and tackle the stigma around mental health in general.

We run a website where we share these ways of coping, as well as people’s stories of how they’ve overcome self-harm themselves and offer practical advice, for whether you’re struggling yourself or supporting someone else.

We make clothing that has a message behind all the designs to try and get people talking honestly and openly, and raise money to keep us running. We attend events to sell our stuff and start conversations; everything from national festivals, to local gigs and art shows.

We also run workshops in schools where we offer young people the opportunity to try some creative coping techniques for themselves, and discuss their situations and feelings.

Who have you helped so far?
It’s funny. We originally set out to help young people who are struggling with self-harm, but a huge range of people have found us and taken something from our message and approach! Even if it’s just that it’s ok to ask for help when you’re having a rough time with your mental health.

We’ve had people from all walks of life get in touch to say how stuff that HATW has put out has helped them. That’s incredibly humbling.

In the very beginning we said if we only helped one person feel better able to cope with life then we’ve done a good job; so the fact that we’ve worked with hundreds of young people and get website hits in the thousands these days is pretty wild, and very amazing.

Tell us more about how you help people specifically?
We do a bunch of stuff which hopefully helps! I think the main thing are the workshops we do in schools, where each week, we introduce a different coping technique, something that’s helped someone else in the past (my favourite is the drumming workshop, because that’s what helped me through my rough patch).

On a really simple level, we’re trying to get a positive message out into the world.

We’re particularly trying to do that through social media. We want to be where young people are, so they can find something uplifting while they’re scrolling through their feeds.

We share a range of content, from people’s stories, to ways of coping, helpline numbers, and spotify playlists of songs that might help if you’re struggling right now.

Any exciting projects or new ranges coming up for the brand?
We’ve literally just launched our summer range of new merch with a message, which is actually including colours other than black and white! I think it’s some of the nicest stuff we’ve done actually.

We’ve worked with some incredibly talented designers from round the UK to make some awesome designs, as well as introducing an affordable price range of shirts for our ‘essentials’ range.

It’s all online now, and we’re going to be taking it to a few events in the coming months, including Arc Tangent festival.

We’re also looking at getting on to Snapchat, so we’re continuing to meet young people where they are. (But I feel like a proper old man trying to get my head around Snapchat, beyond just taking selfies where I look like a dog!) 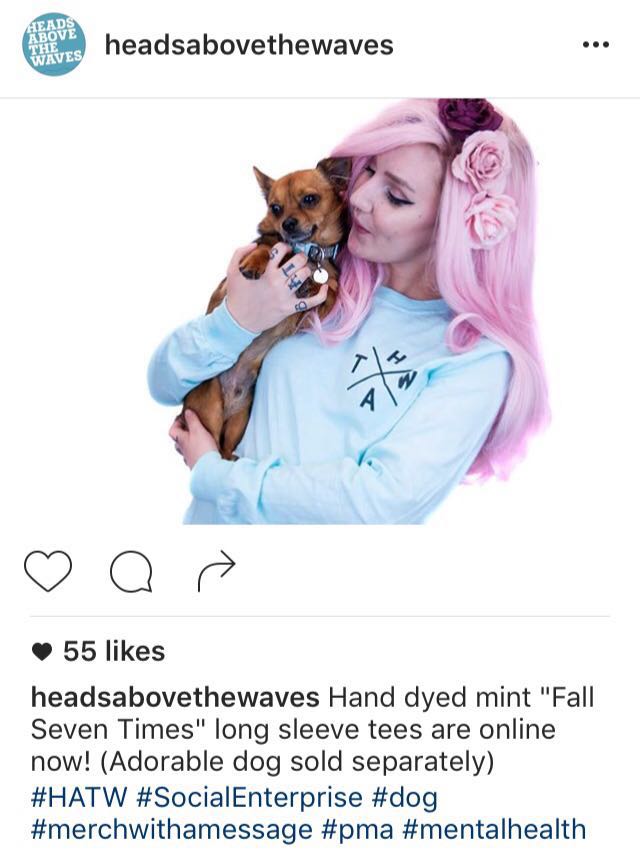 Head Above The Waves Range

It’s a tough platform but we’re sure you’ll ace it! You guys have clearly done a lot, but what would you say has been your biggest achievement so far?

On a commercial level, it’s probably the pop up shop we had in Cardiff. We had 2 months in a shop in one of Cardiff’s gorgeous arcades. That was pretty cool, and really helped get our name out there (which is always helpful) but also started a lot of conversations with people about mental health. They were drawn in by the look of the shop and the clothing, and that led to us talking about mental health with them.

It was great, but honestly, every time we hear from someone that the work we’re doing has helped them is the best feeling and achievement I could ask for. 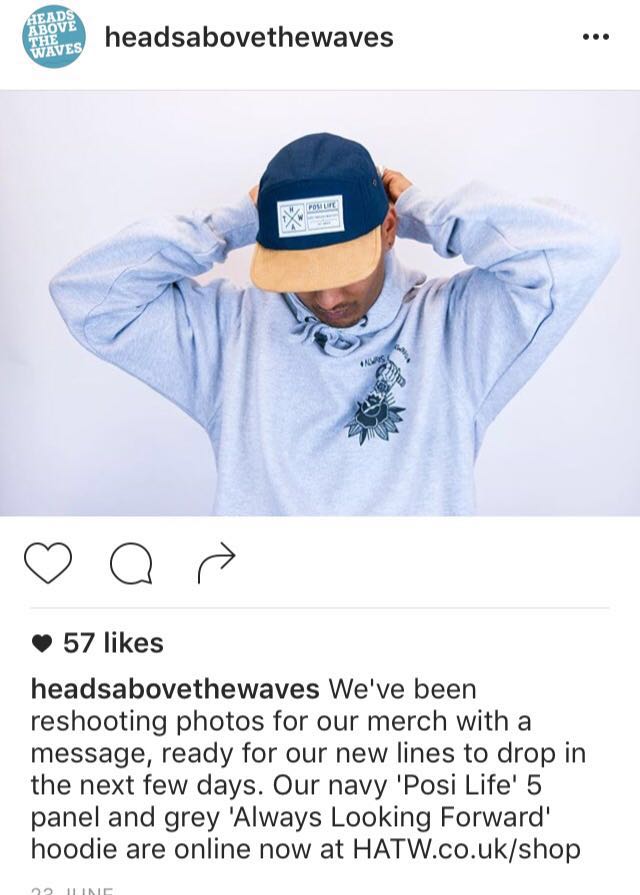 Head Above The Waves Merch

What were your reasons for starting this amazing venture?
Funnily enough, I never particularly set out to be an “entrepreneur.” Even a few years ago I never would’ve said I would be running a social enterprise.

Heads Above The Waves originally came about because I wanted to make some merch for my band that said “pop-punk saved my life” (which is pretty much my story; finding, listening to and making pop-punk music was what helped me when I was struggling as a teenager and continues to help me to this day.) We then wanted to donate the proceeds to The Samaritans.

We went for a small pot of funding to get some t-shirts printed. We got told that they’d only fund us if we were starting our own social enterprise rather than funding an existing organisation.

So we started to research a bit more about what was lacking – most notably, it was information and advice for young people that was accessible and on their level, without being too clinical or too condescending.
I also think that HATW comes from a very authentic, personal place – all of us involved in it have struggled with self-harm ourselves in one way or another.

I guess I’m just trying to give people what I would’ve wanted when I was going through the same thing a few years ago.

Everyone deserves to be happy, and should know that they can get help and support when they need it. HATW is the mission to spread that, and hopefully reduce the number of hospital admissions as a result of self-harm.

Love Si’s story and his amazing company and want to help out?

Check out their new summer range of merch or head to the website to find other ways you can help.

Want to see more from Heads Above The Waves? Head to their social media:
Facebook.com/HeadsAboveTheWaves
Instagram: @headsabovethewaves / @asilverdollar
Twitter: @hatw_uk

Can you think of someone that you want as our #mcm next week?

Send us in their story through our Facebook or tweet us, @BConsultancyLtd with their name and a short sentence to why! 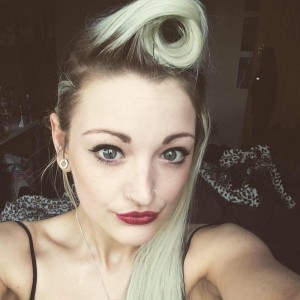 Ink Explosion for all your content writing and social media needs; inkexplosionblogs@gmail.com.

#Brand and Deliver with Kathy Ennis!

#Brand and Deliver with Kathy Ennis!

B Consultancy Ltd brings over 17 years of experience within the Enterprise, Employability and Skills sector.

Our specialisms include business advice, mentoring and start up finance.